What you don’t know can’t hurt you.

It’s a euphemism we all know and we’ve all used – even if ironically.

According to the experts at the Oxford Dictionary, the saying dates back to 1576 where it appeared in a book titled A Petite Palace as “So long as I know it not, it hurteth mee not.”

While it’s a common cliche, the fact is that life experience often proves it wrong.

If you want to see the proof for yourself, you need not look any farther than your sales floor. Because what you don’t know about your salespeople can hurt you.

We don’t often associate analytical tools as the best way to measure the performance of the people we hire to connect with our customers and build lasting relationships. I’m a common sense guy, so if my staff is hitting their numbers and selling cars, there’s really no reason for concern or to take a deeper dive into the opportunities they’re working…right?

What I’ve come to accept over the last few years is that when good data is presented in a way we can easily understand, it has a tendency to challenge everything we “think” we know about selling cars. Too many of us think that we are the “Presidents of the I Think Club.” I learned that from one of the truly smart guys in the car business, Gary Marcotte, over 10 years ago and I’ve never forgotten it.

Dealers have always been able to see their close rates, or how many opportunities each salesperson successfully converted into a vehicle sold. But there is an entire other side of the story they haven’t been getting – and that’s how many opportunities they didn’t close and purchased a car from someone else. In other words, their defection rate.

When you layer in data that shows defection rates to competing dealers or brands in your market, it gives life to a story we’ve not only never been able to see before, but one we never even thought to look at before.

I sold cars for seven years, spent years as a sales manager, then the General Manager of a dealership and I eventually became the CMO of large dealer group with 1,100 salespeople to account for. It would have been impossible to analyze every opportunity every person in our organization touched – so the first time I saw this data in action I was blown away.

Take a look at the graph below. The blue line shows how many cars each individual sold during this 3-month time frame. The gray lines show you the number of opportunities that salesperson touched that went on to buy from someone else – whether it was a same make competitor in your market (light gray) or from a competing brand (dark gray). 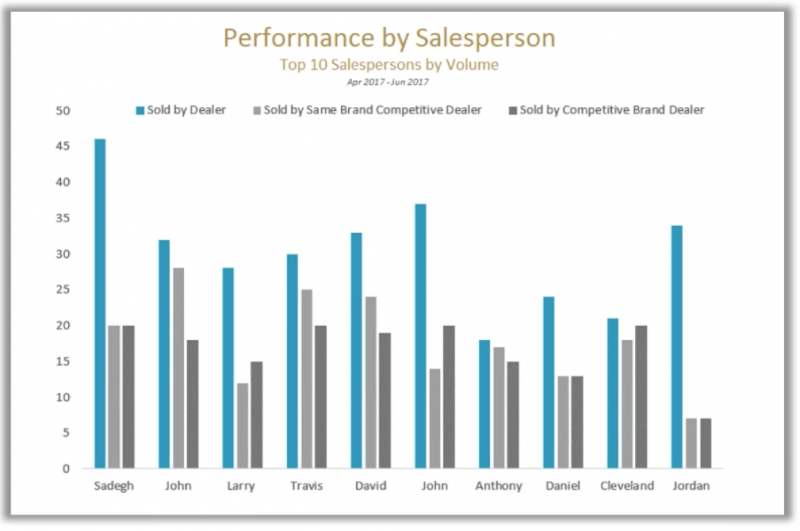 In this example, this dealership thought that John was one of their best salespeople. But when you look at your CRM data with a 3-dimensional lens and layer that lost sale (defection) data on top of it, you start to see the true story behind your “all-star” players. You see how many opportunities John touched that went on to purchase from your competitor down the street or from a different brand entirely.

In reality, Jordan is this dealer’s best salesperson. Based on the opportunities he was working, he sold substantially more than he lost. In fact, out of everyone, he lost the least amount of opportunities. So success doesn’t always translate to selling more cars than you did last month. It can also mean losing fewer opportunities to competitors.

Here’s another example. The screen shot below shows the actual effectiveness of a salesperson as they compare to the dealership overall. So in this case, Jim may only be selling 8 cars a month, but because he’s not getting all the opportunities, his effectiveness is 149% – meaning he’s outperforming based on the leads he’s getting. Bill on the other hand might be getting way too many opportunities and he might look like one of your best sales people, but he’s really only about 47% effective towards closing everything he touches. 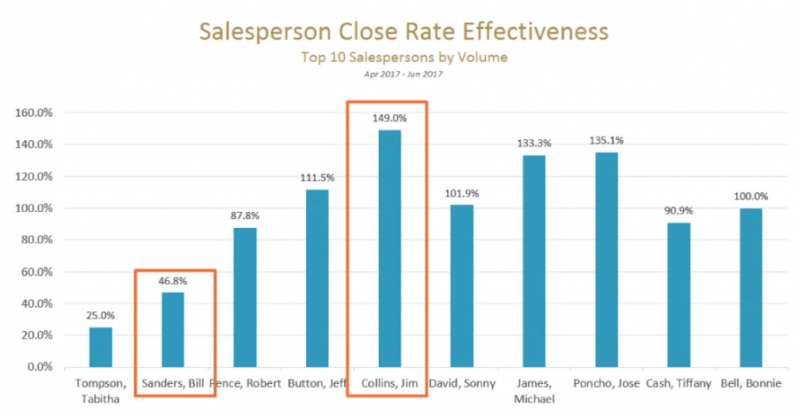 Your best salespeople are the ones who consistently deliver HIGH close rates and LOW defection rates. But you need that defection data in order to truly evaluate a salesperson’s efficacy.

Of course, if a salesperson has a high defection rate, it may not always be their fault. Maybe they’re being assigned far too many leads than any one person is capable of handling. Or the types of leads they’re working come from providers with low overall close rates. There are all these other factors involved. But the first step is getting the data.

It is a side of the sales world few people even think to consider. But it’s one that can highlight salespeople who are able to convert contact into sales more effectively and identify those who might just be approaching every and simply playing the odds – if you approach enough people, eventually SOMEONE will say yes.

What does this insight give to someone managing a sales force? The ability to better direct customers. The insight needed to direct the right sales person to the right situation. Working with someone unsure and needs some extra support and patience? Make sure they’re working with one of your top converters. Being able to direct the resources you have more effectively is one of the best ways to improve business.

Without this insight, you’re left with a sales force that may work harder; but they won’t have the tools to work smarter. That hurts everything from their development and earning power to your bottom line.

By now, we’ve probably made it clear that the old saying ‘what you don’t know can’t hurt you’ simply doesn’t hold water. But if you need any further convincing, consider this.

George Petite, the man credited with coining the phrase, is reported as having died “in the prime of his years” and “being then a captain and a man of note”. No details remain on the cause of his death, however, implying that whatever it was may very well have been avoided; proving, once again, what you don’t know really CAN hurt you.

D
David Metter
David is an experienced and successful innovator with technology companies within the automotive industry. He has created and grown businesses in a hi...