Sidebar
As General George Smith Patton Jr said “if everyone is thinking alike, then somebody isn’t thinking.” This quote came up during a recent interview I did with my good pal, and fellow automotive prognosticator, Eric Miltsch. If you’ve tuned into social media these past few months, you’re a brave soul. Not since the Chernobyl disaster have people willingly thrown themselves into such a toxic environment. That said, it’s a concrete reminder that people have differing opinions on the same subject, yet everyone is content to think alike.

We could all use a healthy debate from time-to-time. I say healthy, because finger-pointing and name-calling isn’t a debate, nor is a bum-rush of friends ready to back up an invalid point. A good healthy debate has opposing candidates, who are educated with solid facts, that can strongly advocate for an affirmative or a negative side of a given topic. Watch any courtroom drama, and you’ll see two attorneys going tow-to-tow in this fashion. No personal attacks. No dragging-in unqualified people. Just a solid discussion that presents both sides of the story, where only the facts are challenged. There are naturally winners and losers in debates, but at the same time everyone gets a deeper understanding of the topic at hand. 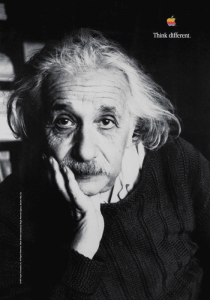 Many people like to quote Confucius by saying “If you are the smartest person in the room, then you are in the wrong room.” This implies that there’s something to learn from those smarter people in a different room. But, if you don’t clearly understand what those smarter people are discussing, and you’re too afraid of retribution to open your mouth, then you might just as well stay out of the f#$%ing room.

Dissension is at the very core of innovation. Thankfully, Karl Benz didn’t think the horse-drawn carriage was the peak of personal transportation. I’m sure his engineering buddies laughed at him. I’m glad that Edison and Tesla went to war over electrical power because we are all using the fruits of their discontent. I thank God that Martin Luther King Jr, Susan B. Anthony, and Marie Curie got loud. Einstein is still being credited today for new contributions to physics, as modern physicists are still trying to prove his theories wrong 65 years after his death. Thinking different has led the way, long before Steve Jobs had it put on a poster.

The well of quotes about challenge is nearly bottomless. It’s cliché to dip a bucket into it. It’s abundantly clear that adversity sparks creativity and progress. It either forces us to refine our ideas to their highest forms or convinces us that there is a better perspective. It doesn’t always take a natural disaster, catastrophic accident, or global conflict to move the needle. All it takes is for someone prepared to say “I think that’s wrong, and here’s why.”

Picture a car dealership where people are prepared to debate. Constructive discussions that don’t start with an eye roll, or “back when I started,” or “this is the way we’ve always done it,” but the comparison of facts. The constant gathering, curation, and presentation of information would create a dynamic force. It could only strengthen the business into a fortress that can weather nearly any outside attack. Instead of the efforts of a few, it would be the sum total of every single person inside of the dealership. John and Yoko were onto something.

If we only surround ourselves with those who will not challenge us, we commit ourselves to stopping growth. If we only listen to those who agree with us, we close ourselves off to new, potentially life-changing, ideas. If we’re content to stifle new voices, the old voices only grow louder. We can’t ask why things aren’t getting better when we’re eliminating the possibilities before they’ve been presented.

In this time of change, welcome the challenges of others. Be ready to accept new ideas while sharpening your own philosophy. Facilitate a healthy discussion with others. While everyone is thinking the same thing, be the one who is thinking.

I originally posted this over on the DealerKnows blog

Bill Playford
Bill Playford is Vice President and Partner at DealerKnows Consulting. He brings a unique automotive perspective, with a background in training, consu...
View thread