Though I rarely have time to go to such things today, family reunions are a great place to hear stories about your relatives, some of which reach legendary status. As it so happens, one of my distant cousins was a Naval Aviator who got to fly the real star of Top Gun, the Grumman F-14 Tomcat. However, unlike other stories you might hear about heroics over the Persian Gulf or going supersonic during an airshow, my cousin did quite the opposite. He dumped a $38 million aircraft into the ocean.

Although I wasn’t in the Navy, one can easily imagine that it’s a complicated feat to launch a 60,000 pound aircraft off of the moving deck of a nuclear-powered aircraft carrier. It takes the coordinated effort of thousands of people, not just the pilots and the sailors on the deck. All of these people have processes and procedures that must be followed to the letter to ensure that personnel doesn’t get hurt, machinery doesn’t get damaged, resources don’t get squandered, and that support can reliably be delivered to fellow service people when in need. These actions grew out of much planning, iterative design, with careful trial and error, all measured with the keenest eye to detail, not a knee-jerk reaction.

As the reality of a slower market is setting-in across automotive showrooms throughout North America, panic decisions are starting to take place at a rapid pace. Instead of trusting in the people, partners, and processes that have worked for years, multiple issues are being addressed at once, with little thought given to how many small and interactive variables are being disrupted.

Sure, if you pushed every key on a pipe organ at the exact same time, a C major chord would be playing, but how the hell would you know? It would sound like noise. It’s like selling off your entire investment portfolio because one stock isn’t performing well, or turning off every switch in an airliner cockpit to extinguish the reading lamp at seat 21C, or burning your house to the ground because it’s messy, or euthanizing the family dog because she has fleas. Thank God we haven’t nuked California to get rid of the Kardashians.

Don’t get me wrong, nuking California might be worth it to get rid of the Kardashians…

All joking aside, it is always a good time to start evaluating assets when things slow down. The operative words here are start and evaluate. When we start, it automatically implies that there is a stop. It doesn’t necessarily have to be a complete stop. It can be a finite interval such as a race lap where the clock stops, yet we keep going on for the next lap. It can be a certain day on the calendar where there is a tomorrow. It could be as simple as from open to close of business. We need to pick a timeframe to base our measurements on. It’s always best to compare year-over-year to smooth out natural seasonal fluctuations (more on that in a second). If the game goes on forever, who wins?

When it comes to evaluating, the first question to yourself should be what can I measure? The very next question should be how can I repeatedly measure it in an accurate way? If you’re not asking yourself that question, everything is left to interpretation. Metrics, like how many outbound calls per car sale, per month, seem like a simple thing to measure. However, does that number take into account calls made from cell phones, home phones, and unlogged office calls? How does that mix change on a month-to-month basis? If the answer is “I don’t know,” then you can’t repeatedly measure it in an accurate way. Sometimes a true yardstick isn’t available, but it doesn’t mean you can’t craft your own. If it’s higher or lower on your scale, then you know, providing you use that scale the same way every single time.

On a final note, stay grounded in reality. I just checked a few minutes ago to verify that we’re not living in a communist country. The answer is not quite yet. There are market forces that exist that will impact your business, no matter how much manpower, inventory, and money you throw at a problem. Accept it or go crazy. You pick. 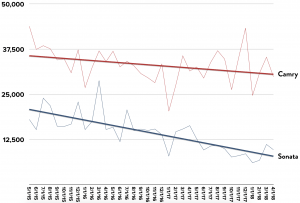 Let’s take a deeper dive into this. Whether you are a Hyundai dealership or a Toyota dealership, the bread and butter vehicles you’ve depended on are not as dependable as they once were. The mid-sized car market is circling the drain right now, despite the advertising, incentives, personnel, site doodads, machine learning, and Google tools that are available.

For the purposes of demonstration, I chose the Camry, which has been the best selling car in the US for the better part of 25 years, and the middle of the pack Hyundai Sonata as an analog for the best of the rest. The graph to the left not only demonstrates a “whoa-Nelly” decline over the past three years, but also demonstrates wild gyrations from month to month. For the math nerds, the +/- on the Camry is a whopping 4,801.85 units, while the Sonata’s is a jaw-dropping 5,112.71 units. In other words, it’s normal for your sales volume to fluctuate as much as 14.85% for the Camry, and a mind-boggling 40.75% for the Sonata. Maybe instead of quadrupling down on resources to prop up a struggling segment of your market, those resources could be allocated in acquiring vehicles that customers are interested in. Like new or used TRUCKS. If Ford can make the decision to reduce its reliance on certain vehicles, so can any dealership.

If the Hitchhiker’s Guide to the Galaxy (along with every safety class we’ve ever taken) has taught us one thing, it’s not to panic. When we panic, we tend to make irrational decisions. That’s why our military and first responders train continuously. They take a breath to measure the situation, recall their training, and act accordingly. They don’t bust out the defibrillator for a fractured leg or launch a ballistic missile over a border encroachment. They take a deliberate and incremental approach to addressing the situation at hand while minimizing the risks of further intensifying the problem. If you make a panic decision by scrapping everything you know, and by changing everything at once, you double your risk of both making it worse and not understanding how to achieve repeatable success.

In the case of my cousin, it all boiled down to a switch not being properly activated so that his fuel level was correctly displayed. Upon takeoff, the fuel gauge read zero, which forced the decision to immediately diagnose the problem, or save his and his copilot’s life. After they were fished out of the water, it was later determined that the crew did check all of the right boxes, and all of the procedures were followed to the letter. My cousin didn’t trust in the system. It cost him his wings.

Bill Playford
Bill Playford is Vice President and Partner at DealerKnows Consulting. He brings a unique automotive perspective, with a background in training, consu...