Recently, I shared a new metric that CarGurus now includes in their dealer reporting. This new metric is called “SRP Impressions”, and at the time I posted, CarGurus was showing this new metric in addition to their normal SRP metric.

A week or so later, I along with many other dealers received an email from CarGurus explaining what this new SRP Impressions metric was, and how it will eventually replace their current SRP metric. What was most shocking to me was their explanation surrounding the old vs. new SRP metric…

CarGurus defined their previous SRP metric as, “…the number of times that you had inventory match a shopper’s search.” They then defined the new SRP Impressions metric as, “…how often your vehicle’s load and display as search results.”

So, it sounds like the old metric was measuring any time a dealer had a vehicle that may have been searched on, but not necessarily seen by a consumer. The new metric means the consumer actually viewed the vehicle on an SRP listing. I suspect most of us in the auto industry assumed an SRP meant that your vehicle actually appeared in the listing, right? I then wondered how the other “Big 3” Third-Party Classifieds (TPS) sites are measuring SRPs, since a common definition is critical for many of my success metrics I report on for dealers.

Here is what I found:

Autotrader.com defines the SRP as, “…the number of times your vehicles appeared in shopper searches…”. Sounds good, that is what we all would have assumed.

Cars.com defines the SRP as, “…the total number of times your inventory was exposed to consumers on Search Results Pages (SRPs).” Also sounds good, what we all likely assumed.

So…it sounds like CarGurus is now reporting in the same way that Autotrader and Cars.com were already reporting. CarGurus indicates that “…until January 2019, you will see both metrics reported on your dashboard, and that you may see a higher or lower SRP metric due to the new calculation.” So far, for the dozens of dealers I track CarGurus stats for, none of them are seeing higher SRP metrics, and all of them are seeing lower SRP metrics. The new SRP Impressions metrics are between 18-58% of the old SRPs, which means CarGurus was overstating their SRPs for these and many other dealers. 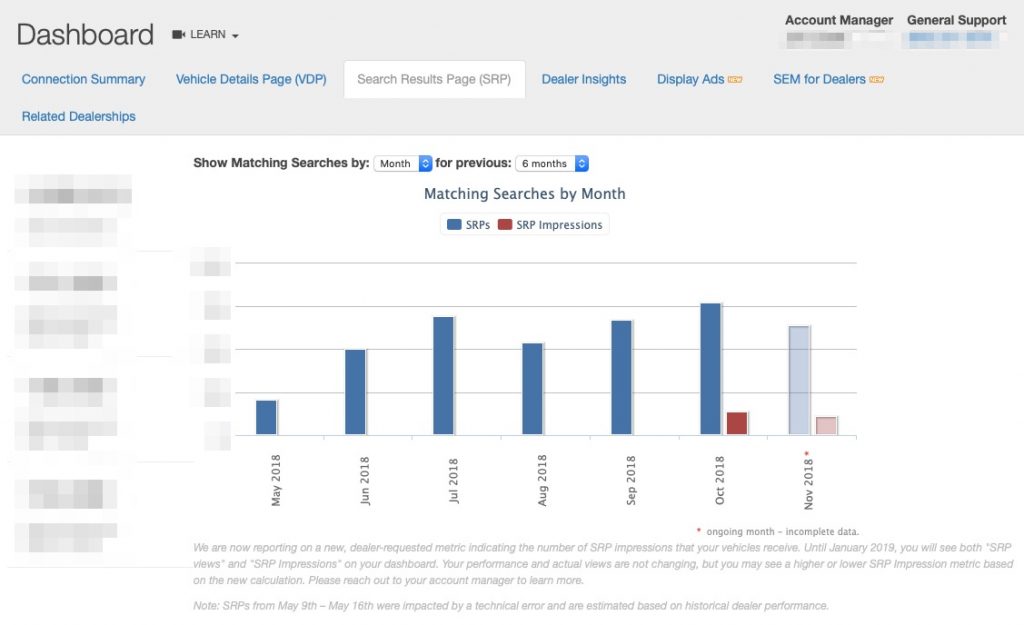 What will be the impact of this change?

Dealers will likely now also see lower SRPs going forward, but at least these will be real-SRPs. Another change will be in key metrics and ratios. One of my favorite metrics to measure for dealers is the VDP-to-SRP ratio, which helps a dealer see how often they “win the click” from the SRP to the VDP. For most of the TPCs, that ratio lives in the 1-2% range. Carfax has always been the exception to that rule with the one of the biggest VDP-to-SRP ratios, around 5-6%. However, with this change I predict CarGurus will now jump to the top spot for this ratio.

Calculating the change for the dealers I sampled, their CarGurus VDP-to-SRP ratio will likely jump from a low of 1% to as high as 7%. Why do some sites have a higher ratio than others? There are many potential explanations, including what information is (or is not) included on the SRP, compelling thumbnail photos, competitive pricing, or even how down-funnel the shopper may be.

George Nenni
George Nenni Founder Generations Digital
Excellent write up George
ALL GOOD POINTS. However, as an Ecommerce director I get it, but as a previous UC director I just want to put my money with the company that provides the best ROI for me. Cargurus out sells Autotrader, Cars.com, and Edmunds combines at our stores, so it is pretty hard to say they aren't getting the Job done. For years, I hated them, but in the past few years they are hitting the ball out of the ballpark daily and for a lot less than my other vendor partners.

I think the price gauging SUCKS, but maybe we all need to learn how to negotiate better with our vendors. When they walked in trying to double my price at our MINI store I didn't rollover and say OK. We worked it out over a few months and I paid a $500 bump.

The Biggest problem I have with Cargurus is that if you get 30 leads on a vehicle and they remove your car. That is messed up when you have a car that is off the chart on a scarify report and I want top dollar for it. I think they need to fix that issue and provide us with as many leads as possible.