To be clear: CarGurus (NASDAQ: CARG) is not perfect. In fact, dealers have plenty of legitimate issues with the company (I’ll detail a couple here). But, when it matters, CarGurus more often than not delivers results for dealers. CarGurus, you see, easily passes the DISC Test (Does It Sell Cars?).

CarGurus, valued at roughly $5.5 billion as of this writing, is likely the most valuable automotive website today. We can argue their generously high P/E ratio at another time; but, given that the primary goal of any for-profit company is to make money for the owners, the owners (shareholders) of CarGurus are certainly pleased.

CarGurus is saddled with (or, perhaps, blessed with) an odd name that – until somewhat recently – no one had ever heard before. Few dealers would spend money on the site and few consumers would visit it.

Then, they built a better mousetrap. They built a website so search friendly it almost immediately vaulted to the top spot on Google searches for the vehicles on your own lot – yes, ahead of your own website!

Funny, that a relatively new website with an odd name, originally founded as a community blog meant to provide advice to vehicle buyers, is now a vendor-partner with virtually every dealer I encounter. And, despite some misgivings about how they operate, dealers continue to send CarGurus a check every month. Why would dealers do that?

Shocking, I know, in this the-leads-are-dead-it’s-all-about-attribution-world we’re living in, dealers would value moving metal over branding.

CarGurus is not Perfect

I’ve heard from plenty of dealers they’re fed up with the CarGurus price increases; they’re going to cancel them immediately. Fast forward a month or so and the dealer is back on the paying side of CarGurus. Why would dealers do that?

I’ve also had dealers complain about CarGurus marketing to the dealer’s own prospects after the dealer receives a lead. Here’s a recent typical example of this: 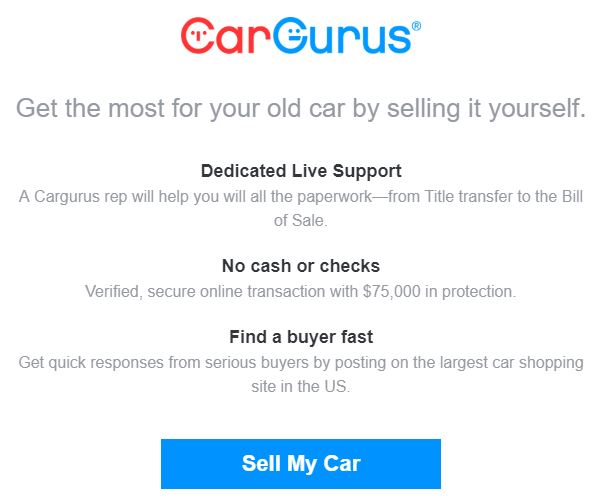 Wait? Do dealers want their prospects being coaxed away to look at the competition’s vehicles? Well, no. Okay, but do they want consumers to sell their vehicles themselves and bypass trading-in with the dealer? Well, no.

Then, why would dealers ever do business with CarGurus?

Crazy thing about dealers, they kinda like selling cars. Moreover, most dealers will stick with a vendor-partner who helps them cost-effectively do this; even when the vendor raises prices or markets to the dealer’s prospects or does something else the dealer finds distasteful.

Why Can’t the Others Do This?

If you’re wondering why none of the other classifieds websites seems as hyper-focused on cost-effectively driving leads and sales for their dealer-partners, then join the club. I’ve been wondering this for almost a decade.

In that time, I’ve tried to help three such companies drive more value for their dealer-customers. I’ve built proposals, made presentations, and even offered extended no-cost pilots of technology solutions. Yet, despite the initial excitement by the sales teams and the product owners (and even at least one CEO), the efforts go nowhere.

Everyone in corporate America, it seems, is afraid to make a decision. A decision, I believe, when coupled together with other good decisions, would likely mean their classifieds website could someday be worth $5.5 billion. Of course, that’s just my opinion; so, let’s forget about my efforts and focus on those websites being lapped by CarGurus (or those destined to never make a dent, despite the money thrown at their development and marketing).

To oversimplify the differences between CarGurus and everyone else:

Everyone else? Great question!

How the Mediocre Sites Arrived at Mediocrity

I’m sure those heading up the other sites would disagree with me, but they’re wallowing in mediocrity (and it shows in their flat or worse results). How did they get here? Another great question! Here are my opinions based on my work with scores of dealers and many of these classified sites.

Wrong Focus. Many classifieds websites forgot (or never knew) who their customers were or what product they were supposed to be selling. Simply put: the product is their website’s audience and the customer is the dealer (and sometimes the OEM).

Audience is the product. Advertisers are the customers. Facebook, Google and CarGurus understand this. Most classifieds websites (interestingly, like most traditional newspapers) do not.

Milking It. (Forgive the overuse of bovine metaphors here.) While a cash cow should certainly be milked, it should not be left to die in the barn. A couple of classifieds websites did relatively little in terms of working to effectively beef-up their cash cows over the last decade. Instead, they milked them because times were good, and the milk was flowing. Given that classifieds websites are primarily technology products, appearing to stand still should never have been an option (regardless of the revenue being realized).

Not Invented Here. Companies both large and small often employ those who simply don’t believe in anyone else’s ideas or solutions. If it’s “not invented here” then it’s no good. In large companies, this attitude may start at the top and trickle down, or it can begin somewhere in the middle management echo chamber that often stifles internal innovation, as well. I’ve personally witnessed a pervasive “not invented here” attitude at virtually every classifieds website company I’ve worked with over the last fifteen years.

Bureaucracies. Large companies often breed a cover-your-ass mentality that rewards the risk-avoiders, the stallers, and the do-nothings. This either causes the innovators to move on or succumb to the bureaucratic culture where they strive to do everything they can to protect their job and their bonus. The bulk of the classifieds providers competing with CarGurus are (in the dealers’ eyes) slow-moving goliaths avoiding risk at every turn.

The Market is Not Standing Still

The success of CarGurus is no doubt driving dozens of would-be competitors to work feverishly in their garages and basements to become the next $5.5 billion Wall Street Darling. Plus, there’s this website called Facebook that’s been doing a better-than-fair job of getting automotive inventory into their Marketplace (and showing promising results for many dealers). The market is not waiting for the other classifieds websites to catch up.

Given the current and future competitive climate, driving innovation that will deliver more traffic, more awareness, more leads and more sales should be top-of-mind for everyone in this space. (I’m sure it is for CarGurus.) The question you should be asking yourself about your classifieds website is simply: What are we doing to become the next CarGurus?

I want to be fair to my friends in the autos classifieds business. Yes, they do send more business to dealers than their lead counts reveal. However, instead of having their teams spend hours trying to convince dealers they’re responsible for selling everything ever sold from the dealership, they would be better served to focus on just a few key drivers of dealer success:

If classifieds sites (some of whom once sold dealers on the idea that a full-page newspaper ad was just wasted budget on a passive medium) just want to passively display a dealer’s vehicle images and data alongside millions of others, they’re going to struggle to find many dealers willing to keep paying them.

Displaying inventory without driving measurable results just means dealers will keep asking, “Why can’t your classifieds site perform like CarGurus?” Given that most of the dealers I interact with have a love/hate relationship with CarGurus, if someone can perform like CarGurus, but without the price increases and the “backdoor” marketing, I think they’d have a real shot at $5.5 billion.

Steve Stauning
Steve is the author of Assumptive Selling: The Complete Guide to Selling More Vehicles for More Money to Today’s Connected Customers;" as well ...
Great perspective - and I couldn't agree more! Thx for sharing.
Great article Steve.
Im getting a lot of value on this website and I love it. I been marketing and selling finance leads for 4 years now. From personal loans, auto loans, auto refinance, insurances, mortgages, debt relief leads. I have been a one man show selling as much as 40k leads a month. and I have been constantly researching and looking to find ways of providing more value, services, data to both ends of the spectrum from customer to lender/dealer/broker. I am closer and closer to my goals every day and content likes this just motivates me even more. This website really is good stuff. Over the years I have been perfecting online conversions and generating quality leads for dealers, lenders and aggregators so I just love landing on websites like this.
i just wanted to drop a comment and tell you, for whatever its worth, that your guys (and gals) words and efforts here in theses articles are appreciated and very much enjoyed.
Keep kicking a$$!